Selling the books on the road was going ok. I was in control of the supply and demand and always had a steady stream of customers from the theatre audience. Then one day a woman e-mailed me and said she’d bought my book and enjoyed it. I asked her where she was from and she said America. ‘I bought it online…’ She said.

This was odd because I didn’t have the book up online. Then I remembered the publishers talking vaguely about an e-book one day. They’d asked me to pick a genre and a category for the novel (they couldn’t figure it out themselves even though they’d published it). I told them it was Irish Crime Fiction/Romance/Thriller. And that’s all there was about it. Until now. They’d been closed for nearly nine months but apparently the book was still for sale somewhere. I looked into it more and realised they’d been connected with major national and international retailers that had e-published the book on their sites. This meant that people were still buying it and the money was going into the publisher’s account. Without my knowledge or consent. I was running in and out of West of Ireland shops in the rain carrying boxes of books to be sold while they were in sunny Spain watching the profits grow online. There was nothing I could do. In order to contact huge chains about listings you ultimately need to be the business that listed it. And that business didn’t exist anymore. Convenient for the publishers, not so much for me.

I decided to publish the book myself online. At least then when people looked for it, they had a chance of finding me directly and not them. I’d heard a lot about Kindle but, not being a Kindle reader myself, had been dubious about it.

After some research it seemed to be the best option for e-publishing. There was no upfront cost, they took care of the digital formatting and listed it on their site, and they were the most popular brand in the market. The downside was the average self published e-book was selling for about 99 cent so the royalty percentage wasn’t that high. However, the argument against this was access to millions of readers around the world that were getting swept up in the Kindle craze. Stories had been abounding of unknown authors roaring to the top of Best Seller lists and making millions from this army of digital readers. Also, the fact that I had the files made it incredibly easy. It only took about two hours.

First I uploaded the manuscript and they checked it for compatibility.

Any word document manuscript is acceptable and there’s also a section called Cover Creator for anyone that doesn’t have a cover ready. It can be a bit tricky to use but doable. If in doubt, anyone with basic photoshop skills will be able to help.

Also, I’d just sold one of my Plays to a film company in London. It was a big break and I figured demand for the novels would increase as a result. But this is Writers in Wonderland, Micky. Looking Glass profits. And how’s it all going now?  Think I made 77 cents last month.

Most days in Madrid I spent checking my e-mail in the Internet cafe and playing online poker. When the publishing deals didn’t come and my four kings were getting busted by regular Royal Flushes, I’d hit the pub. €1 wine, see. Compare that with €5 a glass in Ireland and you feel like it’s a free bar and act accordingly. That’s the problem when you write a book. You get a notion in your head that you can’t move on to the next one until this one is published – like, who came up with that idea?

Eventually it was time to get a job, money going low, all that.

Walking up the stairs, into a TEFL school, thinking – how are ya going to handle this now, Micky. The interview had come fast, within an hour, the demand was high, see.

Everyone wanted to learn English, hire English speakers, a plethora of students roaring to spend money. Sound, says I, sure I’m after doing a watery TEFL course online. They sent me out a cert and everything. Couple that with the Degree and Masters and sure I’ll be sound.

The dominant colour in the office was green. The woman there wanted to know my background in teaching. I gave her the outlines. She seemed impressed. And could I start Monday?

I pretended to think about it. Then said Okay. The money wasn’t great, but it was a job. In Spain. In Madrid. How cool was that?

TEFL turned out to be great for the brain, got the neuro-plasticity going and kept me thinking about language, and linguistic identities, and meaning. The hours were mostly evenings which meant you could write all day. So, I pulled out an old story I’d been working on. It was originally called Last Chance Cafe, but I’d eventually retitle it Fisherman’s Blues and it became my second novel.

El Niño had been heavily influenced by American writers and genre. Some of the conversations and settings were said to be similar in style to Elmore Leonard and James Lee Burke and Anthony Bourdain. Influenced by them. The publishing houses often said they were looking for something more Irish. But when I thought of Irish I kept thinking of emigration stories and more horseshit about what the church did. There was enough of that and more coming. Safe Irish guilt roaring off the shelves.

Teaching forced me to think about how Irish people talk. The way they say and describe things. The job meant a constant examination of form, sentence structure, and idiom. There was a unique poetry in the language of West of Ireland that other cultures found fascinating. It’s a show don’t tell vernacular that I reckoned hadn’t been properly explored in modern Irish fiction – or theatre. When I lived in Ireland I didn’t notice its value, because everyone talks and thinks this way. But when abroad, and learning the intricacies of all languages, it became something worth writing about.

Like Alchemy, what seemed like lead and useless in Ireland, became gold when looked at from an international perspective. Writers make this mistake all the time. Trying to sound so unlike themselves in a quest for absolute fiction – where it’s actually the opposite. The more true the better.

So I opened Fisherman’s Blues with the most Irish, some say controversial, modern phrase I could. It alienated a host of traditional readers, but engaged plenty more. And that was the plan. That’s always the plan. Break new ground, less about what’s already been done. 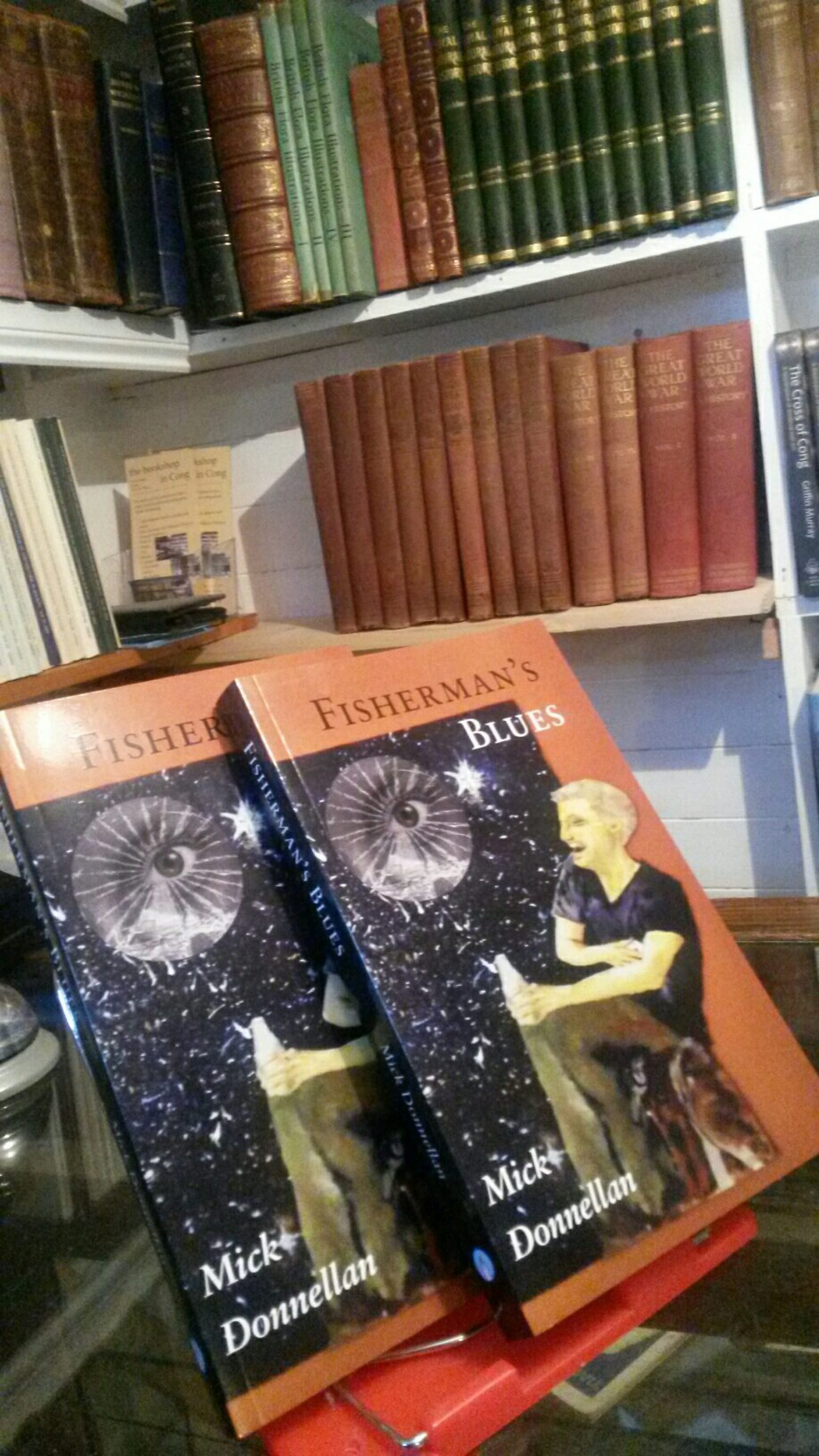 Hard to know where a book really starts. The longer it goes on, and the more experiences you have, the more likely you won’t finish it. It’s because you’ll keep putting in new stuff that happens, that you experience. The tone of your book will change, relative to your life experience and it’ll eventually feel like a mishmash of nonsense. I was thinking this with my second novel – Fisherman’s Blues. I knew if I didn’t finish soon, I never would. The story would be too old and jaded, having gone through too many drafts, like a shirt washed too many times. It would be soon time to throw it out.

The novel began when I was living in England. I needed a job, fairly handy one, cos I didn’t have any proper credentials. I suffer greatly from Formophobia, see. A unique Irish condition. It means I feel physically sick in the presence of all forms, excel sheets, application procedures, bureaucratic questions and phone calls from Private Numbers. When someone hands me an envelope over a desk and says to fill out these forms, and get back to me, I know I’ll never be back.

But now here there was a lot of talk about Job Centres and uploading your CV. The first place I went was superbly air conditioned. And there was machines that spat out tickets with numbers on them. The plan was to wait until your number was called and talk to the polite Englishman at the desk. When I got there he asked for my details – Employee Number, Address, Utility Bill, I.D., Bank Account Number, CV, Phone Number and what kind of work was I looking for? After a pause, punctuated by Vertigo, he said: ‘You don’t have any of this stuff, do you?’

Ok, sir, he said softly. I’m going to give you a bunch of forms to fill out. You’ll need to pop up to Poole and get them stamped, then have a quick chat with the Immigration, go down to the Job Centre in town and get them signed, don’t lose any of them, make sure they’re filled out properly in black ink only. Once you get that sorted, we’ll get you set up and registered here and have you in for an interview in no time at all.

‘How long do you reckon before I could start working?’

Not long, he smiled, five weeks or so.

Thanks, I said, I’ll be back to ye, and I walked outside and fucked the forms in the bin. They wouldn’t fit so I had to stuff them in. After, I felt relieved and concerned at the same time.

Not good, Micky. No Dusht. No hope of getting around them crowd. It was a hot day, with reggae music playing somewhere and lots of noise coming from busy traffic and people talking in shops. There was a smell like liquorice from the melting tar on the road.

I took a left towards the snooker hall. A 24 hour place with cheap drink. Figured everything would look better after a few Kronenberg and a couple of frames. Next thing I spotted a sign on an office window. Hiring Now. So I went for the Paulo Cohello vibe and followed the omens.

The place was called Serendipity. Figure that. Your man inside was called Chris. Wanted to know if I could speak English, had any sales experience. I told him I used to be a top sales man in a Media Company in Ireland. Which wasn’t technically a lie – I used sell Irish Catholic Newspapers for the Legion of Mary when I was a child. Sold 20 one morning after last mass. Record at the time.

Chris asked when was I available to start, he’d pay in cheques, cashable at the shop next door. No need for forms at all. You came to the right place. I told him I’d start tomorrow and we shook hands and I left. Celebrated at the Snooker Hall. Big dhrink.

Years later, Chris became one of the main characters in Fisherman’s Blues, as did the sales office, and many other things that were to subsequently happen.